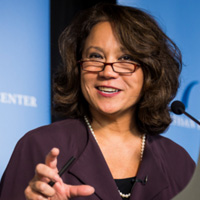 Janet Marchibroda serves as the Executive Director and Vice President of NFL Alumni.

She also serves in several other roles, including President of Alliance for Cell Therapy Now, an independent, non-profit organization guided by leading academic research institutions devoted to advancing the development and delivery of safe and effective cell-based therapies for patients in need; Fellow for the Bipartisan Policy Center, Board Member for HL7, and Co-Chair of Friends of HL7.

She previously served as Director of the Health Innovation Initiative and Director of the CEO Council on Health and Innovation at the Bipartisan Policy Center (BPC), a non-profit organization formed by former Senate Majority Leaders that combines the best ideas from both parties to drive the development and adoption of principled and politically viable policy. She continues to support the organization as a Fellow. Her work at BPC—which has focused on a wide range of topics, including advancing biomedical innovation, promoting interoperability and information sharing, valued-based payment and new delivery models, employer strategies to improve the health of Americans, patient safety, leveraging real-world data and evidence to support regulatory and payment decision-making, patent policy, and regulatory reform—has resulted in numerous changes in federal law, as well as changes in the private sector.

Marchibroda’s other roles in the private sector have included serving as Chief Health Care Officer for IBM, Senior Vice President for Health Policy and Technology at CNI, and Chief Operating Officer for the National Committee for Quality Assurance, an organization devoted to improving the quality of health care for Americans. She also served as founder and CEO of the eHealth Initiative, a non-profit, multi-stakeholder member organization that was instrumental in advancing legislation that provided nearly $40 billion in investments in health IT, as well as Executive Director of Connecting for Health—an initiative supported by the Markle Foundation and Robert Wood Johnson Foundation. She also served as Chief Operating Officer for the National Coalition for Cancer Survivorship. Marchibroda also co-founded and served as Chief Operating Officer of a healthcare-related electronic publishing, data, and consulting services company which was later acquired by Bertelsmann AG.

We Truly Care About Your Health

While we don’t claim that BrRad Prevents, Treats or Cures any medical condition, Clinical Studies and Anecdotal Feedback from Users indicate outcomes that have been observed. We prefer a holistic approach to understanding your illness, or shall we say your “toxicity”..We believe that you are not living your best life possible, unless you are completely healthy.

All Natural and Organic Solutions

Our solutions are totally vegan, organic, and from the earth where many long term health solutions begin. Our initial product, BrRad, provides a Complimentary or Alternative approach to Health and Wellness in General. After all, it’s only Broccoli and Radish active, live and in high micro-nutrient concentrations.

Our Promise to You

We understand that not all products work for everyone. We have started with a single product that we believe is just one of many to come. We want to make an impact on you with this single product and introduce others in a very short period of time….Stay with us!

nusynlife.com
Discount 20% off use code NFLA22

Pure Sports Recovery also specializes in state-of-the-art Brain Training programs for Peak Performance for current players and athletes that are injured, between seasons or transitioning out of sports.

puresportsrecovery.com
Discount 20% off use code NFLA22

Our hormone therapy services are custom designed just for you. We want you to look and feel your very best at home, in the gym and at work! At Streamline Medical we focus on fat loss, hormone optimization and anti-aging. Treat yourself to the fountain of youth with the gifts of energy, weight loss, sleep, increased libido, and more.

Based on your goals, we can guide you through choosing your customized treatment. ​If you struggle with age-related issues like excess weight, hormone imbalance or low testosterone, we can help you achieve health and wellness in every area of your life.

streamlinemedicalgroup.com
Discount 20% off use code NFLA22

Signos is the only company that combines a CGM with an AI-driven app to deliver real-time glucose monitoring for optimal health and weight management.

How Does Signos Work?

As members begin their Signos journeys, they log what they eat, allowing the Signos platform to learn each person’s glucose reaction to specific foods. Once calibrated, Signos uses that data to provide personalized nutrition suggestions, including which foods are best for each member, when to eat them, and when to exercise to bring glucose levels back within their optimal weight loss range.

signos.com
Discount 20% off use code NFLA22

All of our clinics are passionate about providing for your therapy needs.

Our Ivy Rehab Network offices are proud to offer state-of-the-art, compassionate care. By sharing knowledge and investing in research, Ivy Rehab empowers our therapists in advancing the field and improving patient quality of life.

ivyrehab.com
Discount 20% off use code NFLA22

neuvanalife.com
Discount 20% off use code NFLA22